If you are reading this, it means that I am currently in Boston enjoying my first day at PAX East.

If you are interested in following me and my adventures navigating through the expo hall and my thoughts on all the panels, people and parties IN REAL TIME you can follow me on my Twitter page @Snozell. You can bet your bottom dollar that I will be tweeting about anything and everything in between.

This past weekend I did an unprecedented thing, I woke up early on a Saturday morning when I had a no third party obligation to do so. I woke up early to travel to the next city over’s Best Buy to finally capture my current white whale, an Amiibo of the Blue Bomber for my very own.

As I wrote during the last time I talked about Nintendo’s newest wave collectible figurines, I wanted the Mega Man Amiibo only to buy him Ironically. As it is established, Mega Man is a part of the Smash Bros character roster who is a third party Intellectual Properties. From how we have seen Nintendo’s rocky-at-best relationship with other gaming companies and how CAPCOM handle Mega Man’s future games I can almost guarantee that Mega Man will have no Amiibo support for any non-smash game during the Wii U life cycle.

In fact I bought him because of that, same reason when Duck Hunt comes out. because someone has to buy their are so few officially licensed products.

With Mega Man in my possession, I can now stop activly hunting Amiibos and constantly thinking about Amiibos at least for a while.

No more weekend Amiibo hunting trips with my younger brother going up and down every toy store in town, no more casual drive by to stores before and after work. No more searching and constantly refreshing the pages of Twitter, Reddit, and Amazon hoping to find an online store that had Mega Man in stock. I  was so close to caving in and buying from a Amazon scalper at twice the price.

Most importantly of all I can stop worrying out the terrible thought of missing my window of opportunity of securing the Amiibo I want before Nintendo stops producing him and the demand, and cost goes through the roof.  I can put all that fret and worry behind me because I have him now. Currently displayed on my makeshift Amiibo shelf, only to be taken out of his box when a New 3DS or Wii U game is released that specially support him.

He has to earn his freedom

Games from my Backlog for March 2015

Its the first blog post of the new month so it is time dig into my gaming library and find a new batch of games to play through.

As I said before it is a wonderfully easy and relaxing collect-em-up game with all of my favorite Marvel Comicbook characters. One more point that I have not mentioned but it’s only after looking through the screenshots of the early Lego games, the amount of effort the current Lego game devs go through to make sure that all the scenery and set pieces looks like they are made out of authentic Lego pieces instead of low quality blocks, as seen in the early Lego Harry Potter game.

This game also does a wonderful thing by NOT pulling any punches when it comes to lesser known comic book villains and unlockable character costumes. If you don’t know the importance of the clunky Iron Man custom then too bad, the reference was not for you

Rush Bros is a nice platformer with a killer beat from the original soundtrack. The nice in game bonus is that you can add play your own mp3 files but because of the game’s point of gameplay it automatically filters and remix any of your own files. Which is great for music, but not so much with songs. and because of that it made me want to play Audiosurf for all of my current music earworms.

The problem with playing many platformers is that unless one gameplay mechanic is so unique that it makes it stand out from the rest, like Super Meat Boy’s difficulties and Super Mario World’s art and 3D game level design, I kind of lose interest.

Now it is time for my new next batch of games from my backlog…for the month of March…2015.

My first game is going to be the Expendabros, a free promotional game that is a 2D action game that is unapologetically over the top American. As a citizen of the Great U S of A it is my civic duty to play though at least once in my life.

Cue: Bald Eagle cawing behind a wave of explosions

For my second game, I am going to be caving very soon and buying the latest Nintendo handheld game, Legend of Zelda Majora’s Mask 3DS, because after Pokemon ORAS I have been looking for a new 3DS game to sink a handful of hours. 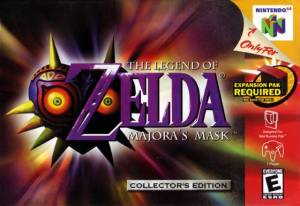 After playing through Wonderful 101 I am patiently waiting for the next major ‘must own’ Nintendo videogame, MM3DS is that, but it will temporarily scratch that itch.

Disclosure: I am apart of the Streamer Partnership Program for Turbine’s A.R.T.S/MOBA, Infinite Crisis, which is a subsidiary of Warner Bros. Interactive Entertainment.

This blog post was written without approval, consent, or knowledge from Warner Bros. Interactive Entertainment or any of it’s subsidiaries