I did it! last night I achieved something that I have not properly accomplished in my entire life time in playing all of WoW’s life. I have leveled another character to level 90.

Thus ends a leveling adventure that took place over three years and three expansion. I started this Night Elf druid during the end of Wrath of the Lich King, after Patch 3.3.o gave the players the wonderful LFG system, from there I only played on my druid when I was experiencing burnout between every content patch in Wrath and Cataclysm which was one of the reasons my druid reached 80 in the summer before Mists released.

Then at the start of this expansion, on this every blog, I made a bet with my Canadian Warcraft friend  that I could get this  now guardian druid to the new max level before the six month anniversary of Mists of Pandaria (March 25th) 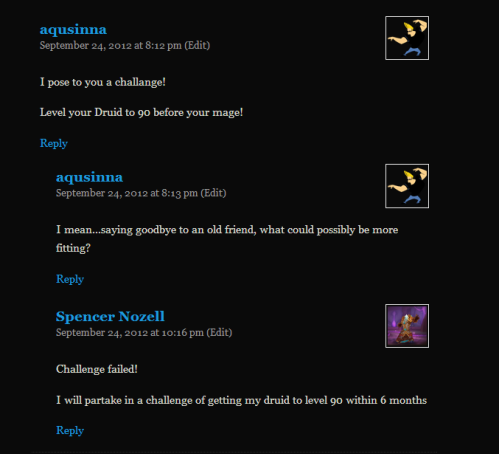 You have to understand I can not STAND the leveling process.

As I saw that last powerful golden bloom that surrounded my druid that a warranted a celebratory first pump into the air a question that popped into my mind, “Now what?” I now have another max level class that can do all the end game content in this expansion and I have no idea what to do with this one.

I could get her denim jeans and get grinding to own another full farm to supply my mage with the materials for feasts, I could make her a Pet Battle master, I could try my hand at the Battlegrounds since now I can play a class that does not get two shotted by every other class, or she can follow my mage’s footsteps and be a face the dangers of Mogushan Vaults.

I honestly don’t know what to do with this druid, I never thought that I would ever have two max level characters so I never put that much thought in to that idea. One things for sure I am not going to leave this druid in the dust again.

P.S: To follow-up on my Pokemon post, I worked my way through the top ten fan picked Pokemon started from #10(Mudkip) and reached level 90 half way through the 6th favorite  Pokemon (Eevee) with a total of 14 episodes under my belt with still 16 more that needs to be watched. Maybe I’ll save those for my next alt adventure…..

Be MOP focuses on the Mists of Pandaria expansion of World of Warcraft with my own reflections about the current news and developments that happens throughout the game’s life cycle. Updates Mondays, Wednesdays and Fridays